SEE OUR NEW GALLERY IN SARASOTA 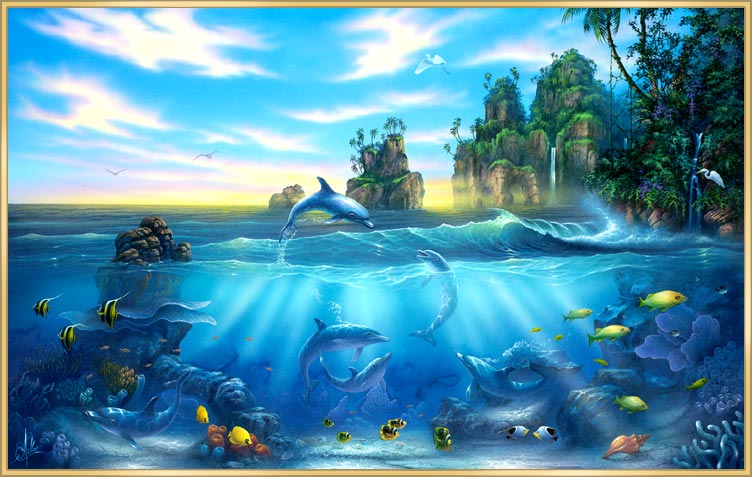 David C. Miller is an internationally acclaimed marine artist who’s work has graced the covers of everything from greeting cards to jigsaw puzzles, but his best work has always been done on lexan and canvas. His use of acrylics have earned him acclaim from art critics as well as environmentalists. David’s personal pursuit has always been that of environmental preservation. His portfolio includes commissioned works for such prestigious foundations as Sea Turtles of the World, an environmental group protecting endangered sea turtles, and The Franklin Mint, part of the proceeds from the porcelain heirloom collectors plates goes to the Save The Dolphin program. His work is also shown in many prestigious Aquariums across the nation.

David’s talent as a colorist is exceptional. His extraordinary palette of colors is at once exotic, yet realistic of the habitat he paints. Certified for open water scuba, David has spent many hours diving in the beautiful waters of the Hawaiian Islands, Jamaica, California, and Mexico. Virtually all of his creations depict an aspect of the natural world. His eye-catching effects of color and light extol the artist’s sense of tranquillity and reverence he feels for marine life and is reflected in his exquisite portrayal of life both above and below the sea. He is known for his brilliantly colored tropical fish, sea turtles, and most of all his dolphins and whales frolicking just below the surface of the deep, clean blue ocean in his "above and below" pieces.

David’s art is shown in scores of galleries across the United States, Japan, Australia, and Europe. His stunning and distinctive images are highly collected through his superior quality prints which reproduce his artwork with breathtaking accuracy. We can immerse ourselves in his artistic vision of the hidden frontier --- the undersea world of shipwrecks and marine life, and his above the water scenes of lighthouses and tropical waterfalls.

In pursuit of excellence even the frames that surround his art are exceptional. They are exclusively produced and custom crafted by artisans at his studio under the supervision of David Miller. Constructed individually, and often formed with multiple frames they feature hand wrapped linen liners, and each frame is hand marbled by the artist David Miller. His unique round and oval frames constructed of one piece of wood adds to the peek-a-boo glimpse of underwater vistas.